Where Do I Get Bees?

Needless to say you can’t keep bees without…bees. There are several ways to acquire bees and pricing varies from $0 to more than $200 per colony. 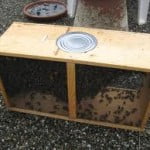 Basically, a package of bees is 10,000 bees and a queen. Packages are generally purchased from bee breeders and they come in a wooden box that has screening material on two sides for air flow. Inside the box, along with the bees is a can of sugar syrup, punctured so the bees have a food source. Also inside the box is another, smaller “queen cage” with a queen inside. The queen is usually not the mother of these bees. The bees have been harvested from multiple colonies and are placed into the box with a mated queen that has been raised by the breeder.

A package of bees usually costs between $80-$125 depending on the breeder. Orders for packages should be placed as soon as possible (usually in January) for delivery some time in the Spring. Purchasers will be given a date for pick-up or packages can be shipped. 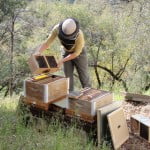 A package of bees does not include a hive, so these items will need to be purchased and set up prior to acquiring the bees. Installation of a package is fairly simple. The can of sugar syrup is removed as is the cage with the queen. The bees are then shaken into the hive box, frames are adjusted, the queen cage is inserted between the frames and the hive is closed up. The queen cage has a sugar (marshmallow) plug sealing her exit. During the time it takes the queen to eat through the sugar plug from inside her cage and the bees to eat through the plug from outside her cage, the bees become acclimated to the pheromones of the queen and adopt her as the queen of the hive. This process of releasing the queen can take a couple of days. If the queen is released too early the bees will see her as foreign and kill her. Also, most beekeepers provide sugar syrup for the bees as a food source until the bees can become established in the hive. Sugar syrup stimulates a gland on the bees that produces wax. Wax is needed to create honeycomb. Honeycomb is necessary for the queen to lay eggs and the worker bees to store pollen and nectar (which turns to honey).

Because a package of bees has no hive, it takes time for them to become “established”. Consider this along with time of year when installing a package.Mentoring under an experienced beekeeper is highly recommended when starting with a package of bees. 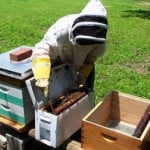 A “Nuc” or nucleus (as in family nucleus) hive, is 3-5 frames of bees and a queen. As you can see from this photo (left) a nuc box is much narrower than a regular hive box. Nucs are created by beekeepers from strong hives that are either preparing to swarm or are strong enough to split off frames (completely built out with honeycomb) that contain the following: brood (eggs/larvae), pollen and nectar (food) and bees. If bees from the mother hive are preparing to swarm, they will have already started rearing queen cells. If not, an experienced beekeeper will provide eggs at a certain age that can be reared as a potential queen into the nuc box. The queenless bees will then raise queens by feeding a special combination of nutrition that matures the egg into a queen bee. An option is to place into the nuc an existing queen, frames with brood, honey and pollen and bees. Regardless, these bees are from the same “family” and the hive is already “established” so to speak.

A nuc will cost from $100-$150 depending on the seller’s asking price. As with a package, orders are usually placed early in the year and the buyer is given a date when bees can be picked up. Once the buyer takes the bees home, the new beekeeper simply pulls the frames from the nuc box and places them into a waiting empty hive box (as in the photo). Also add some empty frames for the bees to have extra space to build more honeycomb and the colony is on its way to expanding.

A nuc doesn’t need the extra time to become established, but it is usually more expensive than a package.

You might consider mentoring with an experienced beekeeper or taking a beekeeping class when purchasing a nuc of bees. 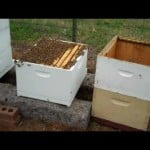 Some new beekeepers simply purchase an established hive of bees from another beekeeper. This is not as common, but does happen. For various reasons an experienced beekeeper may want to sell fully functioning hives. The price can vary but is usually in the $100+ range because it includes the wooden hive components. The benefit is that the hive is well established. The drawbacks can stem from not knowing the health of the bees, what chemicals may have been used on the bees or if the bees are infested with mites (a new beekeeper may not know how to check for this). Also, bees should be purchased from a local beekeeper as bees taken into a different micro-climate might not adapt well to a different altitude or climate. Established hives can be purchased at any time during the year. 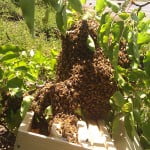 The connotation of a “swarm” to the general public can sound very frightening and new beekeepers are likely intimidated by the idea of collecting a swarm. With assistance from someone with experience, this can be an ideal way to start with bees. First of all, a swarm is free! Consider it mother nature’s gift to your beginning apiary.

While a swarm is similar to a package (see above) in that these bees have not yet built comb nor to they come with brood, pollen and nectar stores, they have other benefits. A swarm of bees are all from the same family. A swarm generally emanates from a healthy, strong colony that has become congested usually due to the influx of spring bloom that stimulates egg laying and food storage. The original queen and half of the bees leave the mother hive as a swarm in search of a new home. This is how bees propagate their species and providing a home to these bees, gives them a better chance of survival than if they were to hole up either where they are not wanted or become a feral hive.

With assistance or experience, a swarm is easy to “catch” or collect and installing them into a hive box is much simpler than installing a package. The other benefit to starting or adding to your apiary with a swarm is that these bees have the proven genetics to make it through a local winter. While honeybees aren’t local to California or the U.S., a swarm is about as local as bees can get. These bees will generally have a better chance at survival in your apiary than bees purchased from out of state or out of your local area.

Mentoring under an experienced beekeeper in collecting a swarm and managing a new hive of bees is highly recommended when starting with a swarm of bees.